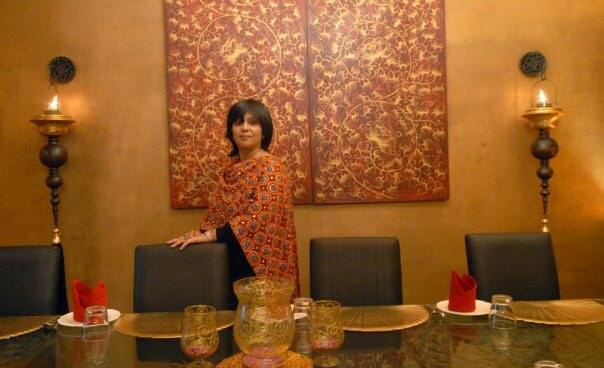 “The future belongs to those who believe in the beauty of their dreams.” – Eleanor Roosevelt

39-year-old Puja Vaid Nemani not just dared to dream but she pursued it tenaciously to turn it into her reality.

Born into the illustrious Vaid family on February 16, 1977, Puja did her education from Loreto Convent in Lucknow, B.Com from the University of Lucknow and her Master’s from Greenwich University, U.K.

Life for Puja would have been like the many girls from typical Marwadi families, where it is customary for them to get married as soon as they reach their 20s. However, it was not to be. Back from the U.K., young Puja was eager to live life on her own terms, breaking the shackles of age-old traditions and daring to dream big and emerge a confident woman.

The year was 1998, when the creative world of stained glass came calling to Puja. Driven by unbridled passion, she organized three exhibitions – one in Mumbai and two in Lucknow. The debut exhibitions which were a total sellout led to two significant changes for Puja. First, a major boost to her confidence and second, igniting the hitherto hidden entrepreneurial knack in her personality.

At just 23 years of age, Puja opened “Dreams,” a lifestyle store in the heart of Lucknow. And just like that, dreams started becoming a reality. With just five tables and twenty chairs, the conception of Cappuccino Blast was laid. When the concept of café culture was still at the nascent stage in metro cities, Cappuccino Blast provided a space to youngsters in U.P. to relax and socialize. In a span of a few months, the café turned into a favorite hot-spot for the city’s young crowd.

It was almost an unheard of thing … a young Marwadi girl conquering the world of business, step by step. An overnight media sensation in the ‘city of nawabs,’ Puja’s popularity soared high. A role model to women all around, her life story soon was featured in magazines. It was an even bigger achievement for Puja when mothers brought their young daughters and looked upon her as an inspiration. With each passing year, Puja’s business acumen only scaled greater heights. The city’s first-ever fine dining restro-lounge, Ultra Violet, opened under her guidance in 2004. Both, the cafe and the restaurant, gained tremendous popularity over the years.

The story doesn’t end here. While she continued to succeed professionally, her personal life, too, took a beautiful turn. Puja had a fairytale wedding in 2010 to Rahul Nemani. The couple had their first child, Samaara, in 2012. That same year, the entrepreneur began another venture – Zeme Home. A dream project that was born from the shared passion for antiques and hand crafted furniture between her Father-in-law, Lt. Shri Gautamji Nemani and her. Another dream became reality with her hard work, determination and his guidance.

Three years after Samaara’s birth, when the couple decided to expand their family, the ever-thoughtful Puja brought an adorable little angel into their lives – Tara. Supported by her husband at every step of the way, the pair chose the route of adoption over natural birth the second time around.

A modest, down to earth, dedicated, philanthropist, who not only looks out for the needy, but more for those who cant even ask for help, animals. No matter the time of day or night, she has never missed an opportunity to shelter, feed or provide medical care to any abandoned or wounded animal she sees.

This is only the beginning for Puja Vaid Nemani … the woman is an embodiment of how dreams can be turned into reality, with just the right amount of hard work, diligence and passion.

PUJA VAID NEMANI, nominee of “MOST OUTSTANDING WOMAN ENTREPRENEUR OF THE YEAR” in the 1st UP FLO WOMEN’S AWARDS — in Uttar Pradesh.